Tantrums are a right pain in the arse, aren’t they?

We’ve all heard of the terrible twos, but why the f*ck did nobody tell me about the whole THREENAGER thing?

I literally want to headbutt the kitchen counter over and over again at times, (which actually might be why my three year old is like he is…) they are so bad.

Since turning three in the summer, I’m sure my eldest son has developed a not so mild form of schizophrenia. He’s like THE loveliest person at times. Tells me he loves me constantly, always wants a cuddle, is polite, asks how I am, tells me he likes my new (stripey) top. All the important things, you know.

Then something switches and he is like a boy POSSESSED! Screaming, crying, shouting, arms flailing, generally lying on the floor or throwing toys around. It’s literally like the end of the world. The tantrums are insane. Five minutes later, he’s back in the room again and telling me he loves me and wants a cuddle. 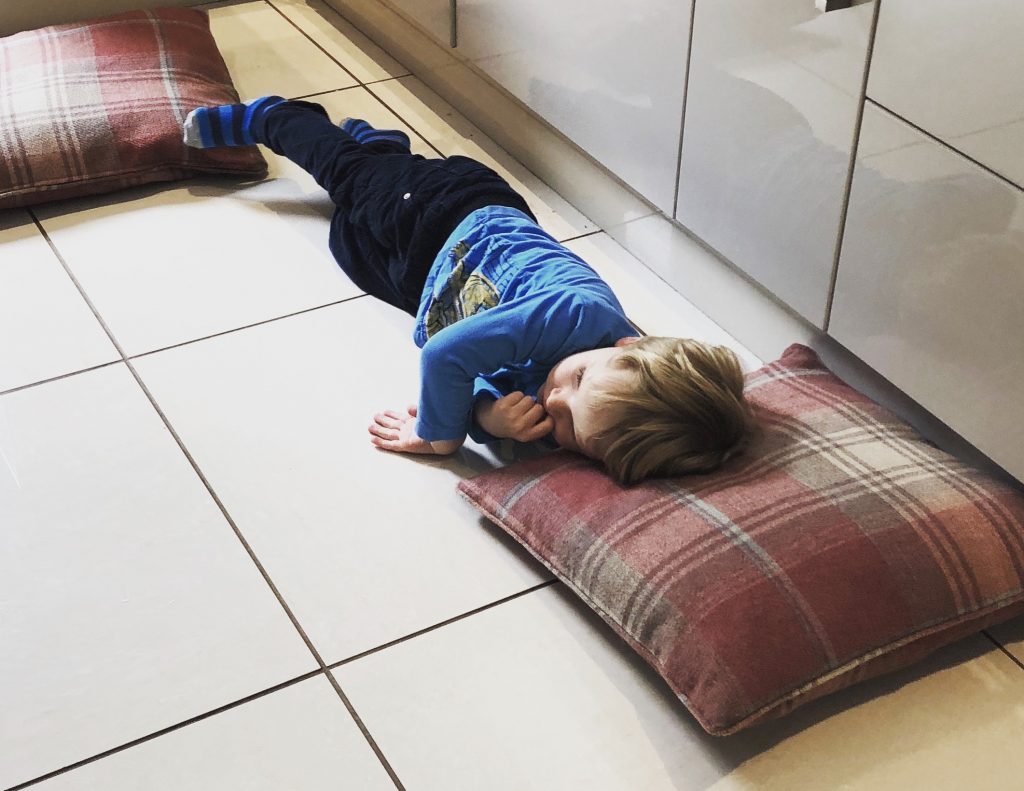 I tell myself this is totally normal for a three year old, tantrums is what they do, and they’re not called threenagers for nothing. But oh my god, it’s so frustrating, isn’t it?

At home it’s all fine. We have a detached house, I doubt if the neighbours can hear and feel the need to call the police. Unless it’s summer and it’s taking place in the garden, of course. Luckily one set are old and hopefully more than a little bit deaf.

It’s when I’m in public that a little bit of me dies inside. We all know the supermarket is the stereotypical tantrum-inducing scenario, but it’s so true!

Because he wants to look at the toys but we’re in a rush. Because he wants the Chad Valley roaring dinosaur but I won’t let him. Because he wants the werewolf Halloween costume (complete with full head mask that would be on for approximately 5 seconds) and I’ll only buy him a £4.50 skeleton t.shirt. Because he wants a crappy Cbeebies or Peppa magazine, purely for all the free shit on the front and I say no. Our house is full of free magazine shit, and the accompanying magazines that never even glanced at.

And don’t get me wrong. Sometimes I realise I need to pick my battles, and when he is on the floor making a scene over a £30 PJ Masks toy, I rightly or wrongly buy him a 10p bag of Haribo instead (I’m all heart me).

But it’s just all so EMBARRASSING, isn’t it? 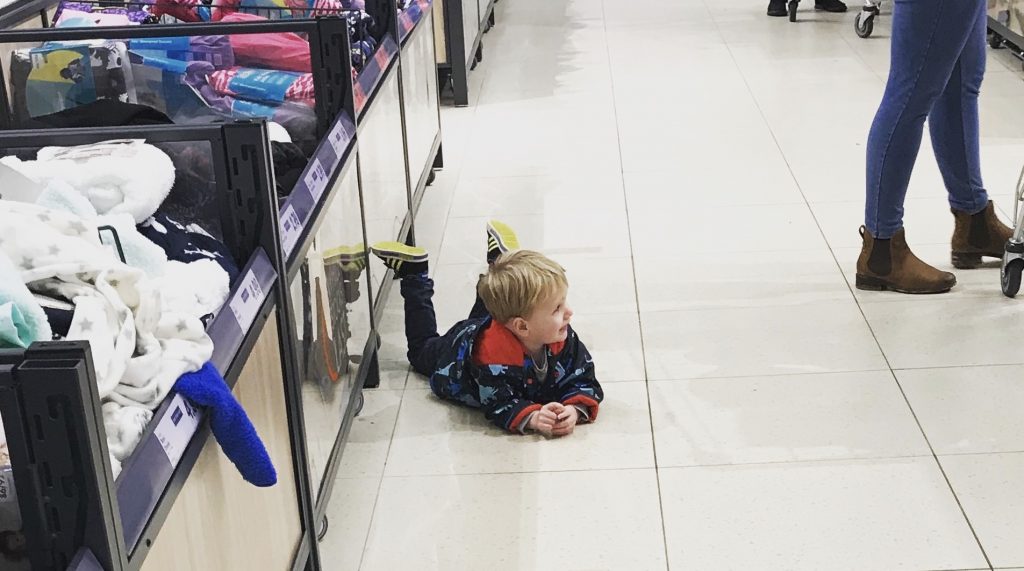 I’m a firm believer that when you’re in public and they kick off, other people are actually watching the parent and how they react rather than the child. You see kids throwing tantrums all the time, it’s nothing new. But I have to say I do feel myself wince inside if the parent stands there shouting back at them. But each to their own. I can’t claim to never lose my shit. I do it daily when I’m tired and my buttons are pressed for the 59th time that day. I just try not to do it in public (too often), but nobody is perfect.

Usually you get a sympathetic look from fellow parents, or nicer still, a lovely comment from a supportive old lady. I even had a shop assistant come over to me the other day and tell me she thought I’d dealt with the tantrum brilliantly, which was exactly what I needed when I was trying to hold it together.

But in the last month when I’ve been dealing with a screaming threenager whilst out and about, I’ve encountered a few negative comments – one old man saying he deserved a smack, and one younger person saying that’s why they don’t have children.

NOT HELPFUL THANK YOU! (that was the polite response)

I tell myself when he kicks off that it’s all just a phase and it won’t last forever. I tell myself he is strong willed and can be moody – just like me so how can I expect anything else! I also tell myself this will be a trait that will come in handy when he’s bossing it in an amazing job in 30 years’ time. 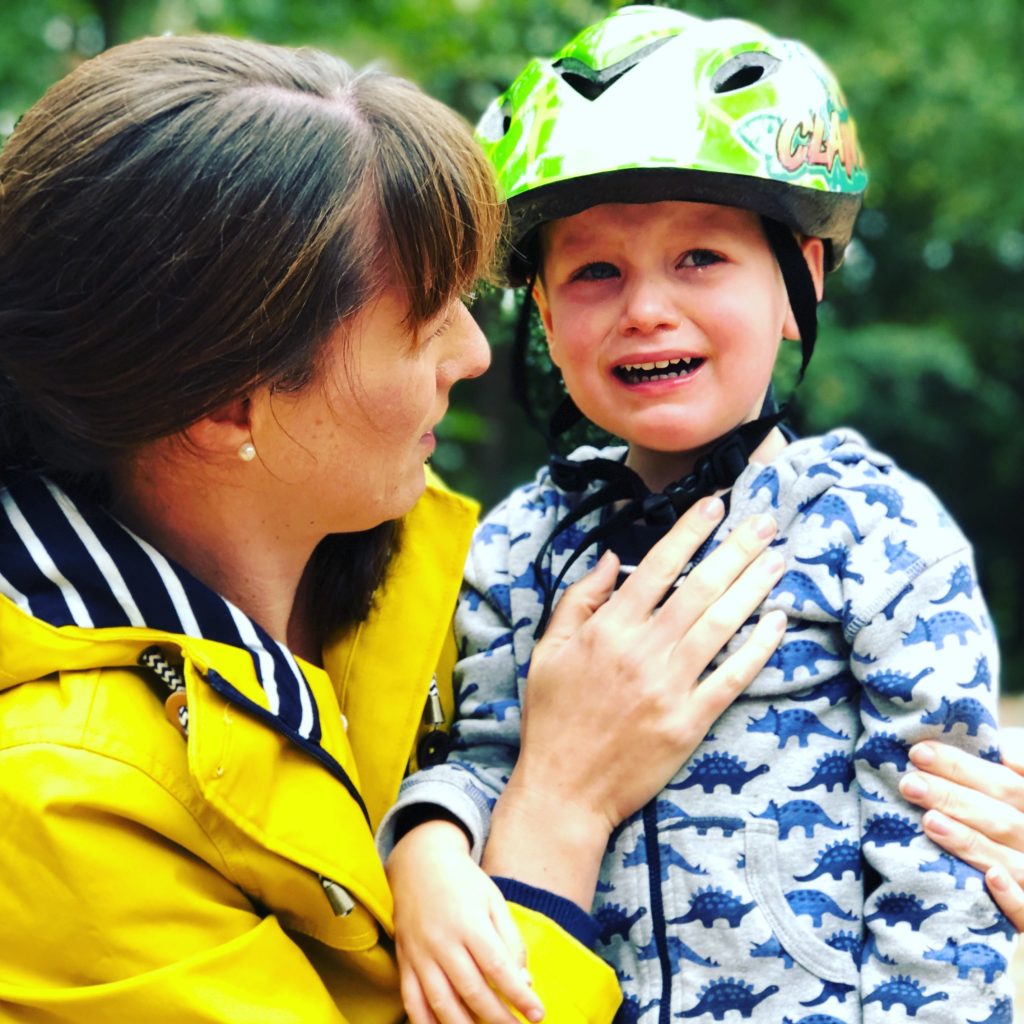 And let’s face it, sometimes you can’t help but laugh at them and their tantrums. (Although apparently laughing in their face doesn’t help the situation). They have a meltdown for such hilarious and unnecessary reasons.

I’m so glad I have two more children bringing up the rear who will hit the tantrum stage at the same time. Wine anyone?

30 TANTRUMS TO MAKE YOU LAUGH OUT LOUD

I asked my lovely Facebook followers why their children have a meltdown. This lot made me laugh out loud!

What are the funniest reasons your child has had a tantrum? 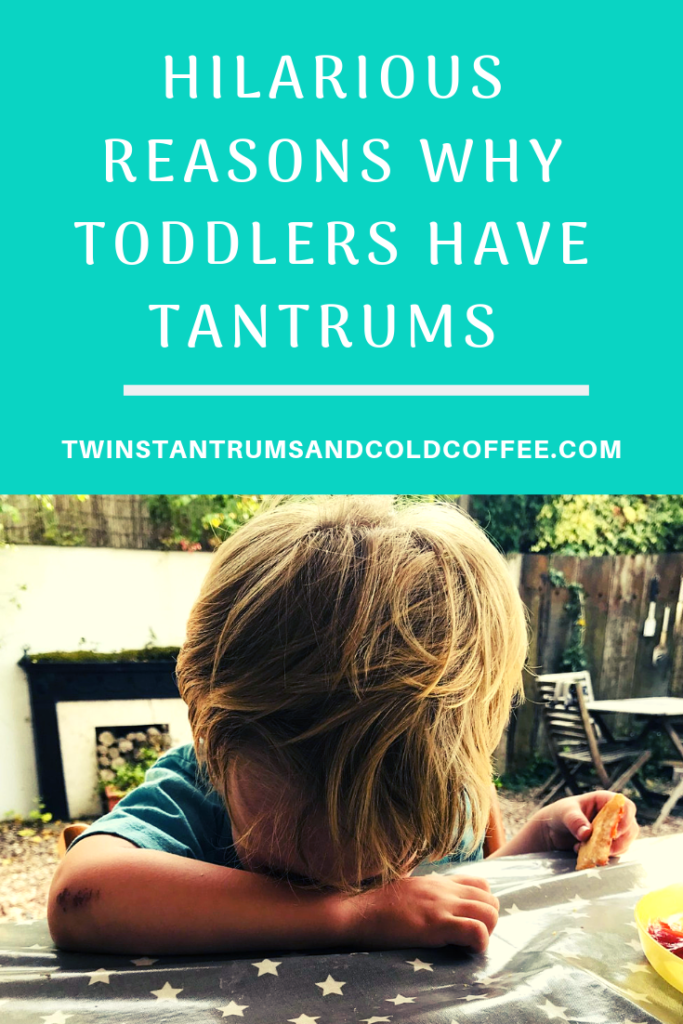 Did you like this blogpost? Have a squiz at some of my other posts while you’re here. You might like – The good, bad and ugly bits about the first year with three children under three or – The love/hate relationship between toddler and baby twins.

Or if you fancy a bit of social media madness, pop over to my Facebook page where you’ll be able to have a laugh at what ridiculousness goes on in my house with three very small boys on a daily basis. Warning – there is often sarcasm, and usually swearing. Feel free to join in though. There are also great travel reviews and some AWESOME giveaways. And if you fancy sharing your own funnies, come and join my Twins, Tantrums and Cold Coffee – Shits and Giggles Parenting Group on Facebook.

How to improve a sh*t day at soft play – win a national blogging award!

My toddler twins have stopped napping – and...

Christmas tradition ideas to start with your family

The highs and lows of throwing a kids’...

10 reasons going out is easier than staying...

Why I’m glad I put off potty training...

All change: a stay-at-home mum’s mixed emotions at...

You do have to laugh! We’ve had tantrums over the little one looking at her big sister before now! My 5 year old cried in the supermarket because I wouldn’t buy her a fingerling toy for being good in school. They get less frequent but tantrums aren’t just for toddlers unfortunately.

Something to look forward to!

Just when you thought you’d gave a bit of a break!

I love this! I have a threenager too! I loved this – He wanted me to buy him new hands as his hands are too small!

That’s my favourite too!

Hahaha! I remember the threenage years well! What joys I have to look forward to with Oscar in a few years; can’t wait to go through it all again… ugh!

I know! I’m already dreading the twins reaching this stage!

Yup, ‘they’ certainly keep quiet about the threenager thing. Buggers. Thought after year two was wrapping up I’d be on solid ground, but nope. Hilarious and so reassuring I’m not the only one. I feel like I’m in frickin crazy land half the time!

I won’t tell you that it doesn’t get any better…….. My lot are 12,11 & 8 now and the tantrums still visit. Although it is mainly me having them. #ItsOK

Don’t tell me that, Ian! But yes I agree, I think I have just as many as him. Dreading the twins hitting the tantrum stage!

Oh I do love reading about other kids’ tantrums… It’s amazing how much funnier it is when they’re not my kids! BTW Phoebe still has a penchant for storing lego and other choke-fest items in her mouth when she thinks I’m going to make her give them to me…. Her current tantrum MO is a full blown meltdown every time she notices her sippy cup is less than completely full, which means that I give her a drink, she takes a gulp or two, and then goes balistic because she needs more drink as it’s no longer full. Fun times… #ItsOK

Ha ha, brilliant. Love the sippy cup tantrum. Did she pick that up from you with your wine glass?? #ItsOK

Loved reading g this. Ah the threenager memories! I’m afraid it doesn’t seem to stop there. My six year old daughter despite having pizza for tea and explaining we couldn’t have pasta bake that night had a meltdown later in the evening when she realised she wasn’t eating pasta bake that day…..#ItsOK

Brilliant! I’m so pleased to hear it’s not going to stop any time soon 🙂

I hate to be the one to tell you this, but just wait for the f*cking fours! My fournado did a serious number on my sanity and therefore my liver!
I swear everyone who knows it gets worse just keeps it a secret from those who don’t know yet!
Good luck my friend, see you in the other side!

My God I’m not sure I can cope with it getting any worse!!

Wait my dear friend, oh just wait until you hit the F*#&$$ fours!!! 🙂 Sometimes, I wish that I could just lie on the floor at work and have a fullblown meltdown 🙂 It must feel great to get it all out!!! haha! Oh wait, I see that Carly just mentioned the 4’s… We will be here for you, glass of wine in hand! #itsok

I’m going to hold you to that, both of you!!

Three is definitely worse than two! Then there’s the fournage years – then they start school thank goodness! #itsok

I definitely agree three is worse than two. By a mile! But now I’m starting to worry about four 🙂 Luckily he’ll only be four for three months then off to school!

I think my daughter was a late bloomer… The threes were OK, but at four nearly five she has had some serious meltdowns, usually because I tell her to stop doing something, or she has the tiniest of miniscule cuts on her finger and its suddenly the end of the world. She’s become a drama queen! #itsok

They all seem to love a bit of drama don’t they? 🙂

Thank you for writing this! I have a 3 year old and twin 2 year olds…all boys. Sometimes I feel like my days are utterly consumed with dealing with tantrums! Reading this makes me feel like I am not alone and that my children aren’t the worst in the world! More power to you!

You’re definitely not alone! The tantrums can be insane, can’t they?!

Top websites and learning resources for homeschooling your...

How to keep preschool and primary aged kids...

The ‘fun’ of moving twin toddlers from cots...

My toddler twins have stopped napping...

Christmas tradition ideas to start with...