Remember The Other Half’s reaction to the news of twins? “We’re going to need a bigger car”.

Typical male thought, I’d say. And a totally reasonable one at that, if not slightly devoid of emotion, but I’ll let him have that one. I was outpouring enough emotion for the both of us.

Turns out needing to get a bigger car, isn’t as simple as it sounds. Or it’s not if you have any interest in driving what is considered to be a ‘nice’ car.

Unfortunately for us, we were in that category. We like a ‘nice’ car. All you need to do is look at the smile on my face in this photo to tell that… Could I look any more smug?

Each to their own and all that, some people like holidays/casinos/posh clothes/big houses, we like cars. What was even more unfortunate was the fact only two months before we’d bought a shiny new, all-singing, all-dancing, top-of-the-range, fancy BMW as our ‘family’ car for the next few years. That one was now begrudgingly heading back to the garage to be traded in, along with its amazing heated steering wheel, and a whole heap of lost equity. Middle class problems, and all that.

Apparently if you want to fit three baby and toddler seats in the back of your car, the choice is, shall I say, somewhat limited. Most cars have a ‘half seat’ in the middle – not that I had ever noticed this. But it ain’t big enough to comfortably (and legally) squeeze a baby into.

I have to tell you, the options are pretty slim. About five cars in the entire world (unless you’re made of money) if my memory serves me correctly and hasn’t been totally buggered by baby brain. I had this rant on Facebook at the time and was met with a few ‘safety over appearance’ comments, and of course safety is important. I’m not THAT bad a mum. But clearly car manufacturers think parents of three young kids have given up on any hope of style (this actually did happen once the twins were born, I have since come to realise) and in fact WANT to drive around in what can only be described as a box on wheels.

Of course I’m exaggerating, before I get shed loads of stick from the car people, but it totally felt like it at the time. There’s some fancy bench seat type thing you can buy for about a million pounds which apparently fits any car, but you then can’t use car seats on a buggy, and we all know what a fan I am of doing that.

So was it my plan to drive a Citroen Picasso, a Ford S Max, or a VW Touran? No it was not. Was it my hope to still cruise around in my lovely BMW or maybe an Audi? Yes. But I also didn’t plan to have three children under 2.5 either and not be catered for by half the car makes on the market. Hey ho.

Did I end up getting a VW Touran with its 7,593 storage compartments ideal for families, (maybe a slight fib) and even put an ugly but extremely-useful-for-holidays-roof box on it?

Yes I did!  Bye bye shiny blue fast car. Hello shiny grey practical box.  This was doing nothing for my yummy mummy status. 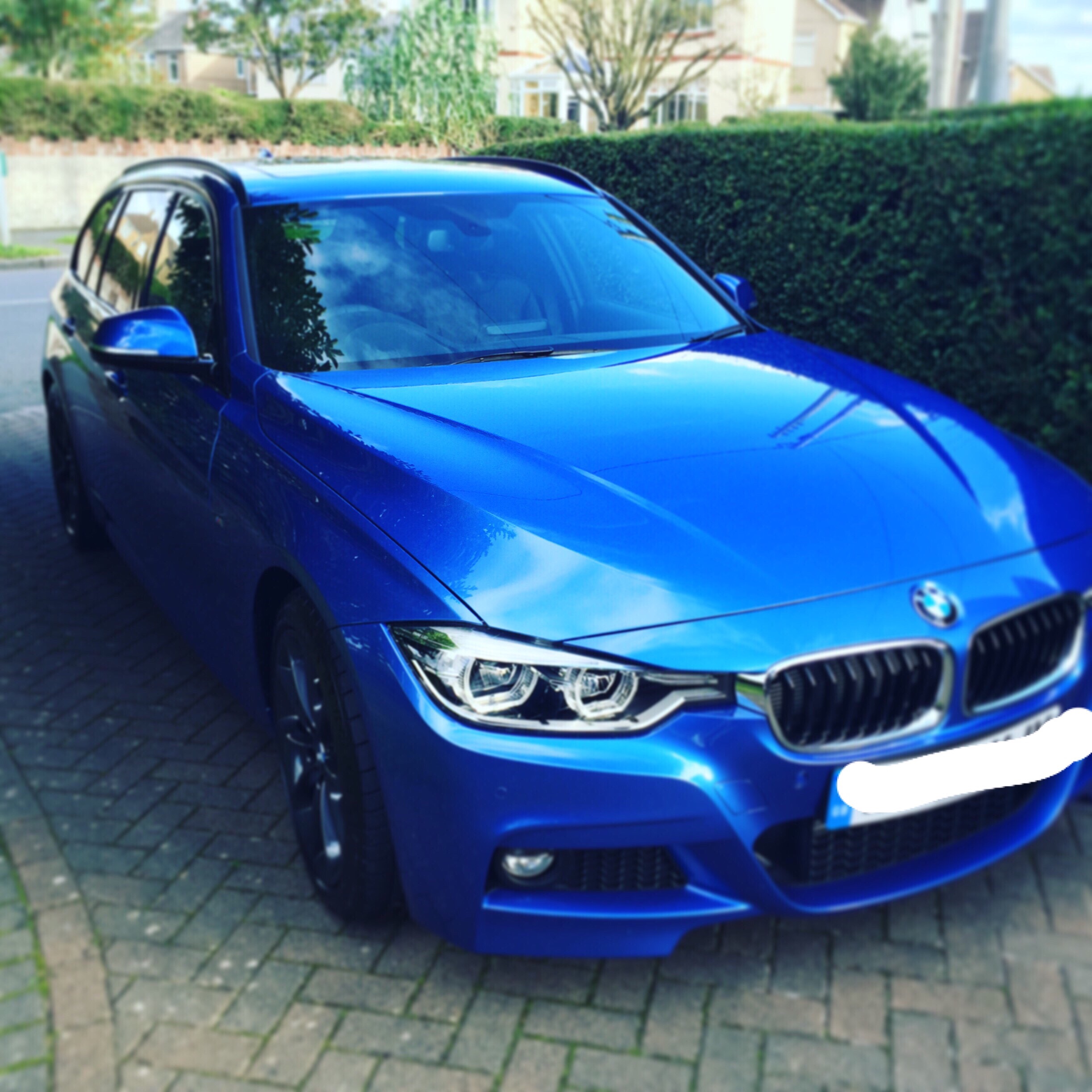 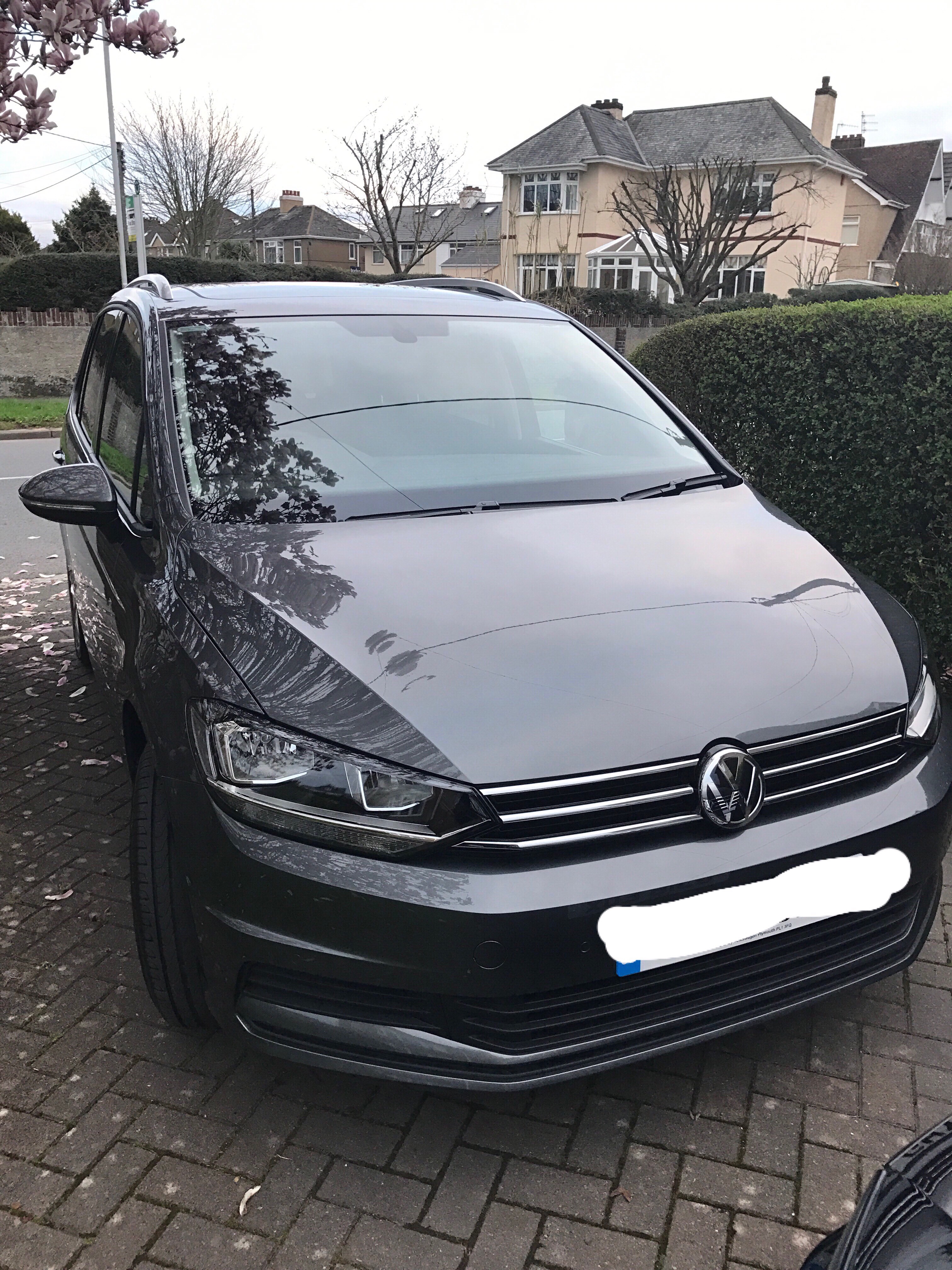 I can hear so many of you thinking “it’s just a car FFS!” And you’re totally right. Now a year on, it is definitely ‘just a car’ to me. In my opinion a dull but functional car that is scattered with toys, wellies, rain covers, pebbles, plastic corn on the cobs, and a boot that’s shit-high with mud from the buggy. It does the job, and I’m actually quite fond of it now. Getting three kids in car seats across the back without doing yourself an injury is a total pain in the ass, but so are a lot of things these days!

Parents of twins with other children, or those with three or more really young kids will get what I’m meaning. The twin groups on Facebook are literally FULL of threads asking what cars people drive. Who knew cars could be such an important topic? Those of you with one or two offspring, conveniently positioned on either side of their rear BMW seat – will continue to make me jealous!

The car wasn’t the only thing we needed to change – but moving house with five month old twins and a toddler is a whole other story for another day.

Did I mention none of this was the plan? Did you enjoy this post? You might like some of my others, so how about you have a read of Forget the advice – this shit is all about survival!  or The early days with three under 2.5 – good job it’s all a blur.

Or if you fancy a bit of social media madness, pop over to my Facebook page where you’ll be able to have a laugh at what ridiculousness goes on in my house with three very small boys on a daily basis. Warning – there is often sarcasm, and usually swearing. There are also great travel reviews and some AWESOME giveaways. Feel free to join my Twins, Tantrums and Cold Coffee – Shits and Giggles Parenting Group too, where everyone shares their hilarious stories.

Twins and a toddler – will I ever ‘nip’ anywhere again?

The early days with newborn twins and 3 kids under 2.5 – good job it’s a blur.

Separating twins at school or keeping them together...

5 practical tips for looking after twins

The best and worst bits of being a...

I have a grey box too! Needed to fit my newborn twins in & 3 year old in also.

Two years down the road, I love my box! They can all fit in easily, I can throw the huge double pram in as well as all the scooters, bags & wellies that comes with three little ones.

We’ll get there one day!! x

We are in need of a bigger car, my husband is not so keen on swapping his little corsa for a practical family car though!

Have to admit, it is a bit depressing!

We just put down a deposit on a Ford Torneo! Because I went from a 5 & 7 year old who are still required to be in car seats, to adding my 15 year old step-daughter to the mix! Talk about needing a bigger car. We also like nice cars! But I don’t like my kids trashing my nice car and my husband bitching at me about it every weekend!! 🤣
#itsok

I think that’s the only saving grace, at least my fancy BMW is now not getting trashed!

Is it a bit like wearing thongs? You’ll never go back once you’ve had kids? 😂

Oh dear, I had always wondered what people did when twins came along! The grey box isn’t too bad, but I can totally see why you’re upset about the shiny blue beema. I’d make the suggestion of having the Touran sprayed the same colour, but I’m not sure if it could pull it off – it might just add insult to injury! #ItsOK

Ha ha, think you might be right. I’m campaigning for a VW Transporter next in the hope I manage to reclaim a tiny bit of coolness 😂 #ItsOK

Soooo, I went from fancy pants job zooming around the country (wearing heels no less) in a BMW M Sport to being a slipper wearing SAHM with a Zuma toy on the parcel shelf of my Ford S-Max fun bus…how did this even happen? #itsok

My god we are the same person! (Although wasn’t ever into heels too much) but was storming it in a busy newsroom! Ahh, those were the days. I’m not a hashtag #blessed type of person, it’s too naff, but I do think the grass is sometimes greener. But if I was still working I’d be in the office already by now. Instead of having been up 4 times in the night and currently watching Dino Trux. Er… 😂 #itsok

My husband had the big box of a car, he loved it … me not so much! Loved my nippy nice car.
When we found that we were having twins to add to our 2.5 yr old some how my car was gone, I inherited the box and hubby got a new car!! How is that even fair??

That’s not fair at all!!

Awesome tips for furnishing your child’s room this...

Brilliant Elf on the Shelf ideas your kids...

Reasons Why Leasing A Car Can Be Better...

Separating twins into different classes at...

First-Time Parents of Twins? Here’s Everything...