GUEST POST: Daddy’s survival guide to a weekend alone with 3 kids under 4

Last month I went on a Hen Do for a blissful child-free THREE DAYS leaving the Other Half practising his Daddy Daycare skills for the whole weekend.

Obviously this wasn’t the first time he’d been in charge on his own. But spending precisely 53 hours and 22 minutes with only a three year old and 19 month old twins for company, it’s a wonder he didn’t send out an SOS. Whilst I was living it up at the spa, drinking champagne, smashing plates at a Greek restaurant, and sleeeeeeeping, he was totally nailing his Daddy weekend. So I got him to write a guest post about it… 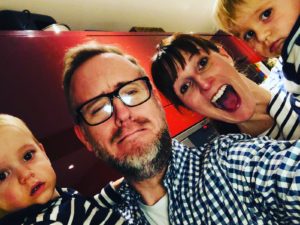 The weekend according to Daddy…

A couple of weeks ago I spent the best part of three whole days in sole charge of my three sons. Two semi-sweet 19 month old toddler. And one little boy I’m sure has a split personality disorder. Although I’m told that’s just him being three.

I knew what to do; keep them alive, minimise any mental scarring. And ensure that when I handed them back to their mother, they looked quite similar to when I took receipt of them.

Everything else was in recess. Learning, decent nourishment, and age-appropriate streaming content, were all to take a back step this weekend, to breathing and time-killing.

As I work away regularly during the week, the weekend is my harbour. Not just because I don’t have to work, but mainly because I look forward to spending time with my family. This weekend though was one I was dreading. Had my training prepared me for this? Had I listened to everything my other half had told me (no, by the way)? “Oh it’s okay I’ll just ring your mother, if the wheels come off”…. “she’s away too”

Bollocks, this is fucking terrible! 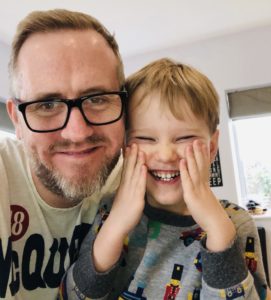 But now the dust has settled, and normality has resumed. And when I say normality, I mean their mother co-habiting. The other normalities like screaming, punching, shitting, and saying Daddy every three seconds, were maintained with a vengeance. I can honestly say that it wasn’t that bad.

Tiring and mind-numbingly tedious at times. Patience shreddingly arduous at many more times. But not the threshold of hell type levels of attrition I was expecting.

So to help other dads through this, surely-bound-to-happen-once-in-their-lives scenario, I’ve put together the Top 3 Daddy as Primary Carer (for 3 days) Survival Tips.

Before I start, let me just explicitly clarify, that men are at a distinct disadvantage in their role as primary care parent. The most acute disadvantage is the lack of a network of other men in the same situation.

Generally when men get together with other men, it’s to watch or partake in sport or some such leisure activity. It’s not exclusively connected (but mostly is) to the word ‘beer’ with a question mark following it… “Beer?” “Yes, mate”.

What men don’t often do (i.e. never) is use phrases like “hey, fancy a playdate in the park over a coffee and a Danish?”

Needless to say, when I found myself in the company of three ultra hostile, and hungry hooligans. Who were looking to hit in the face with whatever toy they’ve just snatched – semi-violently – from their brother.  My list of who I could share the occasion with consisted entirely of my brother-in-law. And only because his kids were my kids’ cousins. As it was he spared me 2hrs, so here are my tips for surviving the remaining 53 hours. 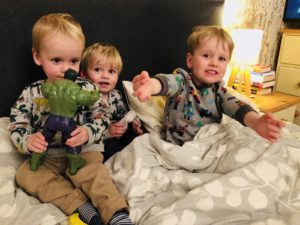 In the day job I’d use ‘Fail to prepare, prepare to fail’. But with toddlers you’ve got to prepare within in an inch of your (and most importantly, their) life. I mean, plan ahead 6 or 7 steps, for them and you. It’s exhausting!!

If they have a metal toy car in their hand, you mentally ‘game out’ the next 21 possible outcomes for that toy car. Three of which could be it landing in your face from 7 different angles. At this point I should point out that planning ahead also means your own life. Otherwise you would get nothing, and I mean literally nothing, done for yourself at all.

Did I mention it’s exhausting? The physicality of keeping them alive and semi-entertained is doable. But the mental strain of keeping on top of it all makes me wonder (with newly discovered admiration) how Mrs Copson manages to stay awake each day past 8pm.

With this lesson quickly learned, after about three hours of the first day.  I very swiftly made the decision that if I can’t plan sufficiently ahead within the safe confines of their own home. Then there was no way I was braving it outside, where upon release they disperse (in different directions) quicker than inmates escaping a burning jail. 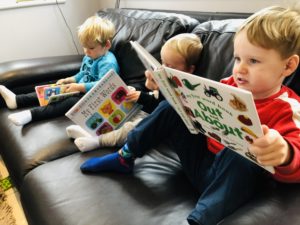 Since they are such inexperienced communicators, I don’t mean, listen to them in some softly, caring way, to the subtle signals of their health and safety. I mean just pay bloody attention to every question and reference to ‘Daddy?’ they offer. Which, and I have genuinely calculated this, is 39,600 times over the course of the weekend.

A toddler can go from zero to bat-shit crazy in less than two seconds. Well mine can, at the very least.  That becomes one second, if they don’t feel like they have your undivided attention, immediately.

As a member of the male species, through thousands of years of evolution, we have learned to tune out the white noise of daily small-talk and minor detail. So we can concentrate on life-preserving matters and animalistic call-to-arms such as “beer, mate?”

But to a toddler this is unacceptable. Tuning them out means they are at Def-Con 5 before you even realise they were already at Def-Con 1. This can be very tiresome when you’re trying to catch 40 winks whilst they watch Monsters Inc for the 47th time. 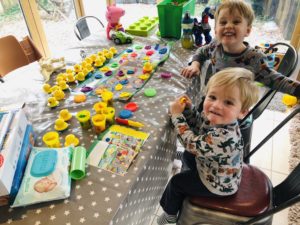 As much as sticking them in front of Monsters Inc, for the 48th time, is remarkably tempting, I got an enormous sense of worth from just playing with them. Knowing that in some small way it was contributing to their development (and my time-killing).

Before I had kids I used to think that I’d be really good at this. I’d look forward to getting Lego out and building, or playing football with them. Now I have kids I can tell you all that it’s spirit-crushingly frustrating.

But let’s just imagine that you have managed to corner one with a puzzle game that involves laying out 67 separate pieces, and some instructions? (yes I did this). Well the time taken to set this up – or any game for that matter – is vastly disproportionate to the amount of time that they’ll actually play it (two minutes or so), before getting distracted by some cheap plastic dinosaur they carelessly discarded half an hour earlier, or getting so bent out of shape in frustration that the cheap plastic dinosaur is aimed at my face.

Nevertheless, playing with them is life enriching when it goes well.

Eat the snacks in secret

So these are the 3 things I learnt most of all (as well as to eat all snacks for yourself, in private).

Some male friends have said I played this all wrong. Apparently I should have proven myself to be a monumental disaster of a Daddy, so that I’m never tasked with the responsibility again.

It was tiring, mentally debilitating, and stressful, but the truth is it was nowhere near as bad as I thought it would be.

Having said that we were all ecstatic to see Mummy come through the front door on Sunday, just in time for tea. 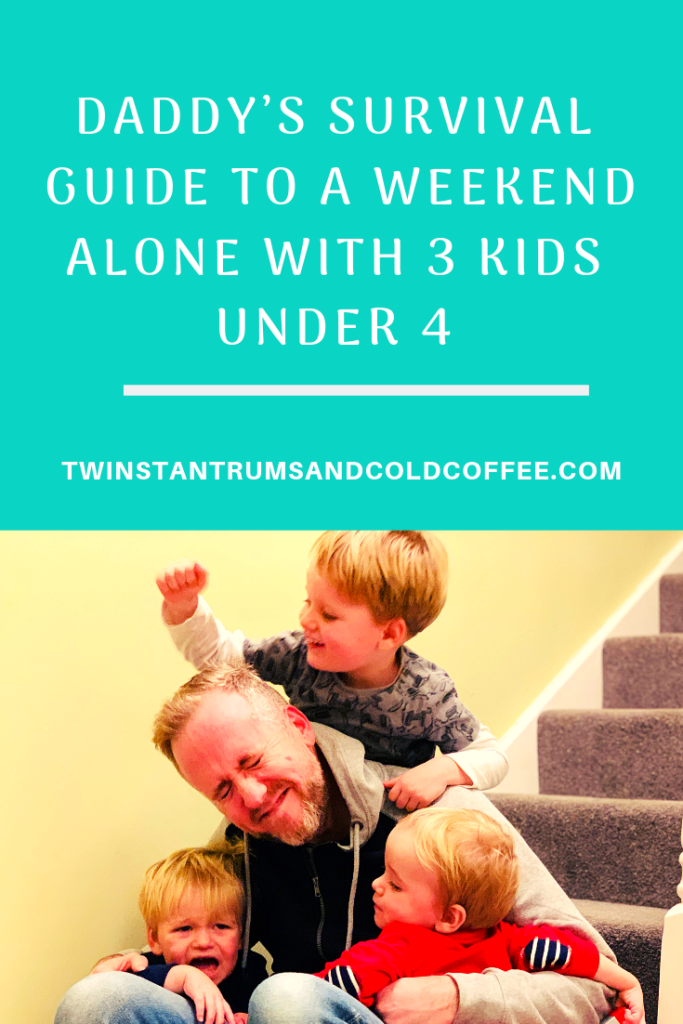 Did you enjoy this Daddy post? You might like some of my others, so how about you have a read of  Why every mum needs mummy mates or 10 things I wish I’d known before having children

Or if you fancy a bit of social media madness, pop over to my Facebook page where you’ll be able to have a laugh at what ridiculousness goes on in my house with three very small boys on a daily basis. Warning – there is often sarcasm, and usually swearing. There are also great travel reviews and some AWESOME giveaways. Feel free to join my Twins, Tantrums and Cold Coffee – Shits and Giggles Parenting Group too, where everyone shares their hilarious stories.

Ultimate guide to half term activities in Plymouth

Tips on how to take care of your...

5 Life Skills to Explore with Your Child...

Why is Reading so Important for Children?

Brilliant tips on how to raise a team...

I LOVE this post, my husband looked after our 3 years old daughter two weeks last month. By the end he was mentally exhausted, I can’t imagine what would be if he had 3 of them to look after 🙂
Well done to your hubby!

I think he was glad to see me come through the front door!

I love this post. Glad you got a nice break away and Daddy got through his weekend too.

Thanks Jade. Could do with booking in another one!

When Is the Right Time to...

Tips on setting a feeding schedule...

Tips on how to take care...