Home » TRAVEL REVIEW: Isle of Wight is packed with fun days out for kids
holidaystravel

TRAVEL REVIEW: Isle of Wight is packed with fun days out for kids

Holidays with kids are a whole different ball game, aren’t they? For us our main priority is finding ways to entertain them all – and wear them out so they’ll sleep. Not that we’re selfish or anything. So the Isle of Wight was just perfect.

We’re a few years off the ‘go abroad and sunbathe whilst kids are entertained by strangers’ type holiday (not that I’m gutted about that, honest) so we aim to choose places where there is a lot to do.

With twins who have just turned one, and a toddler who was three two days later, it can sometimes be tricky to find places where there is stuff to entertain everyone. Toddler will happily run around and enjoy pretty much anywhere we take him – add dinosaurs and animals into the mix and you’re onto a winner.

But unless we’re feeling particularly harsh (joke), it’s also nice to get the Twins out of their buggy and let them explore, rather than them sitting back being pushed around all day – we wouldn’t want them to rest too much and not sleep later, would we?!

The Isle of Wight turned out to be the ideal option for an activity-packed family holiday. The Island is only 23 miles wide, but the amount it has to offer visitors and holiday-makers is immense. You literally wouldn’t believe the number of attractions, particularly family-friendly ones, in such a small area.

I remember going to the IOW several times as a child, even on a school trip, but that was nearly 30 (ahem) years ago. No, I can’t believe I’m that old either. From the bits we saw on our short break this time I got the impression not much has changed, but in a cute rather than stuck in the past kind of way.

We did a Monday to Friday break, so by the time we travelled to Portsmouth and got the ferry (and vice versa on the way back) we had three full days on the Island to make the most of.

We started off at Tapnell Farm Park, a former dairy farm, which all three boys loved. We’re not just talking pigs and goats here. We’re talking alpacas, meerkats and wallabies to get up close to. Toddler was loving life. 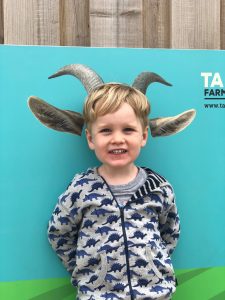 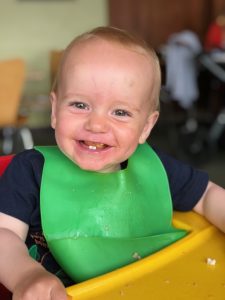 If animals aren’t your thing (although not sure you’d go to a farm park if they weren’t) there were plenty of opportunities to play. There’s a huge barn with a three-storey soft play zone for kids of all ages – but importantly for us there was a specific toddler bit we were able to let the Twins crawl around in.

There’s a Straw Bale Adventure Barn which is home to the Island’s longest indoor zip wires, a straw bale pyramid for exploring and climbing, pedal go karts for the under 8s, and also full-sized pedal go karts for older children and adults. Some of them have passenger seats – ideal for Toddler to be whizzed around by the Other Half and ended up being one of his favourite parts of the day. 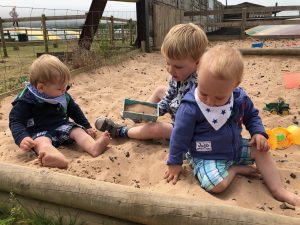 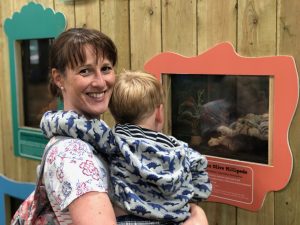 Other hits were the farm’s sandpit, park and Jumping Pillow – a giant bed of air, a cross between a bouncy castle and trampoline that holds up to 20 people at a time – including adults. A word of advice though – if you have had three babies in less than two years DO NOT GO ON IT. Enough said.

We spent another of our days at Blackgang Chine family-friendly theme park. If you’ve been to the Isle of Wight, you’d have heard of it. This place is old school –  I can remember it from 28 years ago and not much had changed if I’m honest. My taste in fashion has though. A little bit… 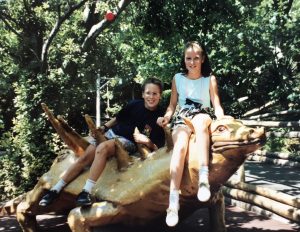 It’s a mix of rides, goblins and fairies, nursery rhyme characters, cowboys and Indians. And with the exception of a fabulous Underwater World, and an amazing dinosaur enclosure which is home to the biggest animatronic T Rex in the country (an absolute WINNER for our dinosaur-fanatic, albeit I think he did actually sh*t himself when it roared), I could remember most other stuff from when I was 10. 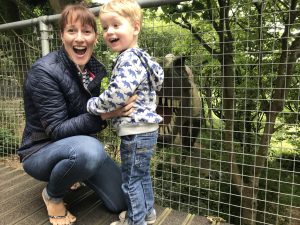 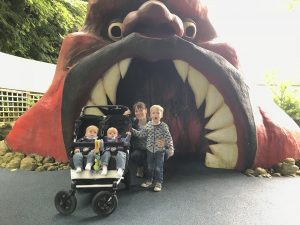 With entry costing a pretty steep £20 whether you’re a child, adult or OAP, (luckily for us under 3s are free) it’s pricey – especially if you have kids over four.

Other attractions on the Island ideal for families include Isle of Wight Zoo, Shanklin Chine, Isle of Wight Steam Railway, Carisbrooke Castle, Amazon World Zoo Park, Dinosaur Isle and Osborne House (Queen Victoria’s modest holiday home!). There is also the famous Needles Park and Alum Bay. I have fond memories of the place, but with two babies and a toddler and only two pairs of hands, there was no way we could have confidently got on a chairlift down the cliff. Some people would no doubt have done it, but sometimes you just have to know your limits!

We stayed at the Away Resorts Whitecliff Bay Holiday Park in Bembridge, south east of the Island. As its name suggests, it’s right on the coast with rolling countryside on one side and and it’s very own stunning beach on the other. Although pushing a double buggy and carrying a toddler back up from it was loads of fun – said nobody ever. 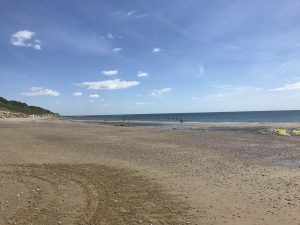 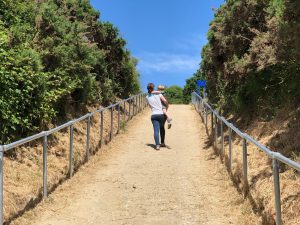 You can choose from static caravans, lodges, chalets, glamping, camping or taking your own touring caravan. We were in a luxury static van which slept six – albeit two on a sofa bed which we gave up on after the first night! What an absolute faff, that was.

It was modern, spacious and comfortable with a fitted kitchen, shower room and ensuite, a dining area, lounge, two bedrooms and a large decked area outside. Towels and bedding were provided, and when we arrived there was a pack of goodies containing tea, coffee, sugar, biscuits and prosecco. It’s like they already knew me. 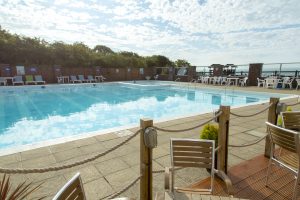 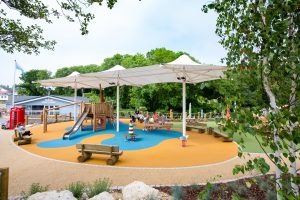 Facilities on site were perfect for kids. As well as an undercover adventure playground, there was an indoor soft play area complete with its own Lego station (yes a Lego station!), crazy golf, multi-sports court, arcade, an outdoor play area, seasonal outdoor cinema, and an indoor swimming pool with slide, bubble pool and toddler splash pool. It also has a stunning heated outdoor pool with toddler area and loungers looking out to sea, which of course we couldn’t all go in together (grrr). 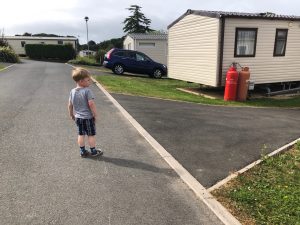 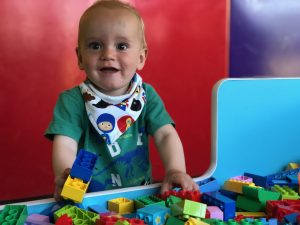 If you didn’t fancy cooking in your accommodation, there are a number of choices onsite. The newly-refurbished Nab Bar is next to the outdoor swimming pool so you can eat poolside, in the lounge bar, or on its large outdoor decked area overlooking the bay. We were lucky enough to visit in the June heatwave so ate several times looking out to sea. Obviously the Twins ate all sorts from the menu. Toddler ate chicken nuggets and fries. You can also eat at the Beach Cafe and Culver Club.

If you want entertainment, the holiday park offers a programme of activities. During the day kids can take part in the site’s ‘Play’ programme which is a mix of creative and outdoor adventures for five to 12 year olds. (Under fives can also join in if they take an adult along with them.) The ‘My Active’ programme is then aimed at older children and adults and includes body zorbing, archery, laser tag and crazy carts. I have all those delights to look forward to when my boys are older!

If you don’t have to put three young children to bed, there is entertainment on offer every evening such as live performances, quizzes and bingo. Or if you want to take them along with you there are shows, fun and games aimed at the little ones in the early evening.

Away Resorts run Little Camper mid-week breaks out of school holidays designed for young families where they can enjoy creative and sporty activities, children’s theatre, a toddler disco, and meet characters from Bear in the Woods, Lucy and Scratch.

We travelled to the Isle of Wight from Portsmouth on Wightlink ferries. It’s a 45 minute crossing on a car and passenger ferry, and was a great way to start the holiday – especially with children. They also run ferries from Lymington, and a Fastcat passenger service from Portsmouth. 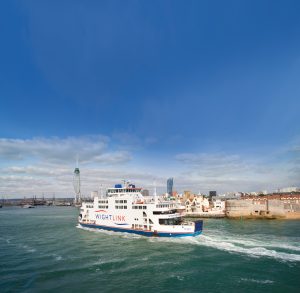 If staycations are your thing and you’ve never considered the Isle of Wight as a family holiday destination, I’d seriously urge you to think about it. It might only be 23 miles wide but it’s absolutely packed with things to do. I reckon you could easily stay for 2 weeks and still not do everything. I’ll definitely be back. But I won’t be waiting 28 years to return this time.

Five ways a holiday is never the same after kids

Best campsites for families in the UK

The Best Ways to Get Around Europe

Best places for families to stay...

Best places to stay near LEGOLAND...